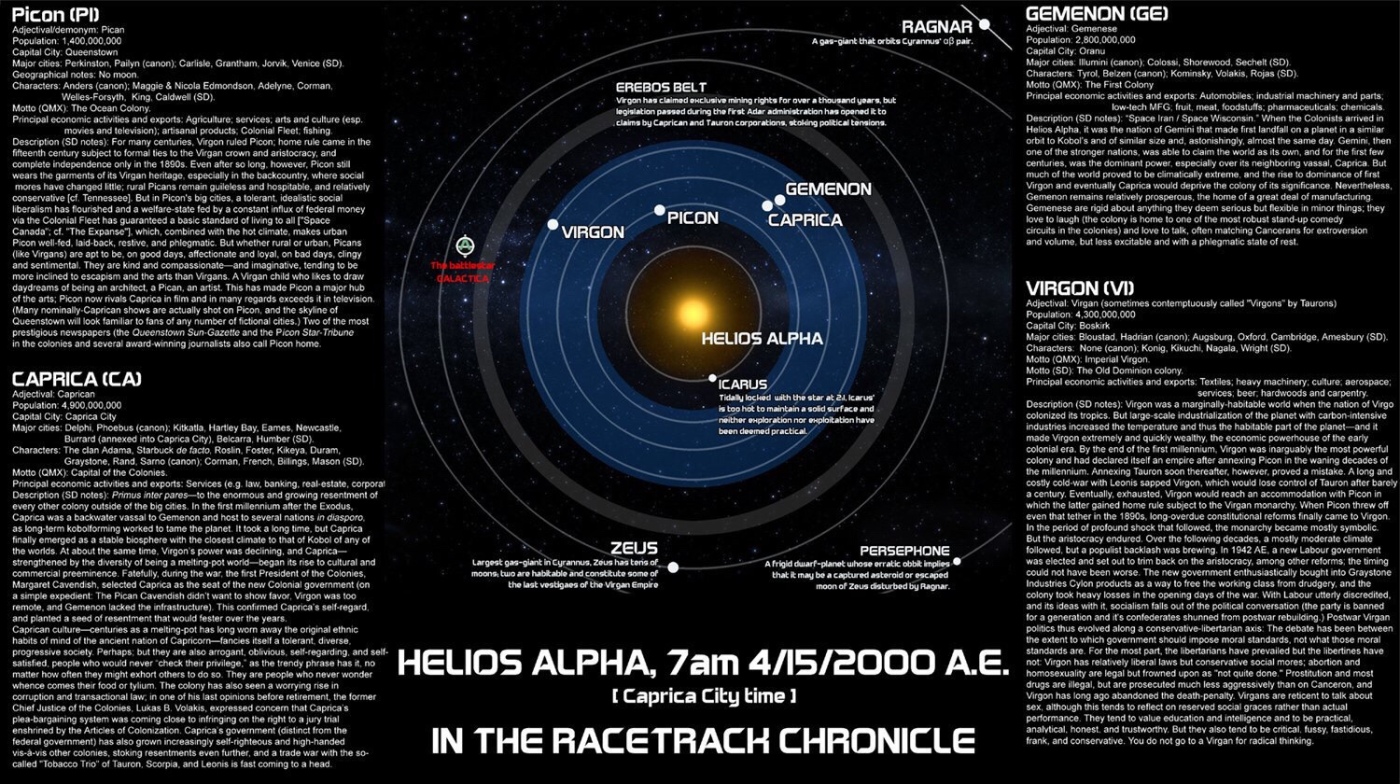 The good folks at QMX sell a gorgeous map of Cyrannus,* the system which contains the Twelve Colonies. It’s based on the IRL Epsilon Lyrae system. I have one framed on my office wall. But as I identified from the outset (and will summarize here) the “Maggieverse” insists that QMX made three significant mistakes. The Racetrack Chronicle cannot avoid confronting one of them directly: The location of Virgon.

Battlestar Galactica may start a long time ago in a star-system far, far away, but it takes place in our own universe, subject to the same rules of physics. This allows us to extrapolate some “canonical facts” (i.e. things that are not explicitly stated in canon but which follow by necessarily implication from things which are so). From those, it follows that contrary to QMX’s positioning of it in Helios Beta, Virgon must be in Helios Alpha.

(For more on why CH798’s flight and Colonial comms must be subluminal, see the fuller explanation in the post linked above.)

(A minor nitpick rejected: Technically, Jupiter is “over an hour away” if we were to drive there this afternoon in a beat-up Morris Minor. But the pragmatics of the phrasing are clear. Virgon is more than 60 minutes away but fewer than ~100 minutes away.)

We can demonstrate this by running the numbers on the best-case scenario. Suppose that the Galactica is 30 light-minutes directly along the axis between the αβ pair, and both Caprica and Virgon, coincidentally, are also sitting right on that axis at that moment. On those facts, the Galactica is at least 18.5 billion KM from Virgon’s orbit.** Even if we stretch the pragmatics to breaking-point and say that the Galactica is two hours from Virgon, she would have to move at 9.2 billion KH/h, which is 94 times faster than our clocked speed for CH798 and a significant percentage of the speed of light. And, again—that’s the best-case scenario.

Thus, in my continuity, I take QMX to have made a typographical mistake, flipping the positions of Virgon and Tauron.

This is an idiosyncrasy of the Maggieverse continuity, I admit. But swapping the positions of those two planets is the solution which does the least violence to the map while making the math work. Nothing canonically insists that Tauron is in Helios Alpha, and canon requires that Virgon must be. If Virgon is just inside the habitable zone of Helios Alpha and the Galactica is between the asteroid belt and Zeus, it becomes conceivable that if the fight is far enough toward Zeus’ orbit that it can plausibly be called “near” Virgon’s orbit, and if the alignment’s just right, maybe the Galactica could make it there in an hour doing a speed within the ballpark of that at which we clocked CH798.

The consensus in the fan community seems to be that the QMX map is the most canonical non-canon thing there is, so I hesitate to deviate from it. I treat it as canon except for those places where it cannot be correct. This is one of those cases: The math is inescapable.

* How’s that pronounced, you might wonder? The word comes from a TOS episode in which Starbuck refers to his home port as “SIH’ra’nus galaxy” (rhymes with tyrannous), which was presumably scripted as Cyrannus. That’s also the prevailing pronunciation among fans. Nevertheless, I have made an argument for “KŪR’ah-nus.”

4 thoughts on “Helios Alpha and Virgon”